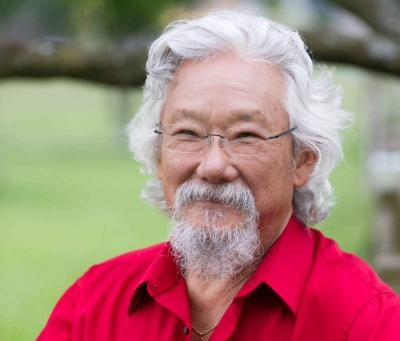 David Suzuki attended Amherst College in Massachusetts from which he graduated with a Bachelor of Arts degree in biology in 1958 and became particularly interested in the study of genetics. He then received a doctorate in zoology from the University of Chicago in 1961. Suzuki worked for the Oak Ridge National Laboratory and began a career in academia at the University of Alberta in Canada, working there as an assistant professor for two years. Following that role, he became a professor at the University of British Columbia and continued to work there for nearly four decades.

While working at the University of British Columbia and researching genetics, Suzuki also began broadcasting shows on television and radio. He believed that bringing science into the greater public consciousness would contribute to a richer culture and improve public policy on scientific issues.

In 1970, Suzuki started hosting Suzuki on Science, a weekly television show for children, and Science Magazine, a weekly show for adults. Between 1975 and 1979, he launched and hosted a radio program called Quirks & Quarks. From 1979, Suzuki hosted a CBC television series called The Nature of Things. The show aired in almost 50 countries across the globe. In later years, he hosted The Secret of Life, a highly-rated PBS series, and he also hosted an award-winning series called A Planet for the Taking.

In addition, Suzuki wrote a book called The Sacred Balance, which was later converted into a miniseries, and produced a documentary for the Discovery Channel called Yellowstone to Yukon: The Wildlands Project.

Suzuki is committed to tackling sustainability issues around the world. In 1990, he founded the David Suzuki Foundation, a nonprofit organization that tries to find solutions to global environmental problems. He has since become renowned as an activist for climate change.

In early 2008, Suzuki encouraged students at McGill University to challenge politicians who he claimed were not taking sufficient action in the fight against climate change. He also launched a television show that year called The Suzuki Diaries along with one of his daughters. The show was broadcast on CBC and addressed sustainability issues across the globe. The hosts of the program first traveled to Europe to discuss the balance between humanity’s needs and what the planet can offer. They then returned to Canada where they met with scientists and fishermen to talk about sustainability and health along the Canadian coast.

In 2014, Suzuki launched a cross-country tour to try to raise awareness for what he argued was the lack of official Canadian recognition of the right to live in a healthy environment, unlike 110 other countries that had done so. Celebrities such as Neil Young, Emily Haines, and Margaret Atwood took part in the tour as they share Suzuki’s goal of adding a right to a healthy environment to the Canadian Charter of Rights and Freedoms.