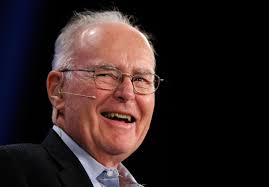 Gordon Moore – The Science of Philanthropy

Born and raised in California, Gordon Moore attended San Jose State University and the University of California, Berkley, graduating in 1950 with a Bachelor of Science degree in chemistry. He received his Ph.D. from the California Institute of Technology in 1954 which he followed with postdoctoral research at the Applied Physics Laboratory at Johns Hopkins University.

Moore started working at the Shockley Semiconductor Laboratory at Beckman instruments, but left after entrepreneur Sherman Fairchild agreed to back Moore and seven other scientists in founding Fairchild Semiconductor. The group has become known colloquially as the ‘traitorous eight’ due to their leaving Shockley en masse.

In 1965, when asked during an interview, to predict the future in the semiconductor industry, Moore speculated that components in a dense integrated circuit would double every year for at least the next ten years. This prediction became known as Moore’s law and has become a target for, and influenced much of the development and miniaturization in the semiconductor industry and technology as a whole.

In 1975, Moore, along with Robert Noyce, founded NM Electronic, which went on to become the giant of technology: Intel Corporation. Starting as executive vice president Moore was appointed as president in 1975. Moore was named Chairman and CEO in 1979 and remained in the position until 1987. He was appointed chairman emeritus in 1997. Intel is one of the world’s largest pioneers in the development of new technology in integrated circuits, computer memory and microprocessor development and design.

In 2011, Moore became the first person to have his genome sequenced on the Personal Genome Machine platform, developed by Ion Torrent.

Moore met his wife Betty while the pair were studying at San Jose State University. They were married in 1950 and so began a lifetime of philanthropy and service for the couple which culminated in the year 2000 with the establishment of the Gordon and Betty Moore Foundation, endowed with a gift of $5 billion.

The foundation began its work with a focus on science, the environment, and programs in the San Francisco area. As a director for Conservation International and the foundation supports several projects, both locally and in the Andes-Amazon Basin.

In 2001, Gordon and Betty Moore donated $600 to Caltech making it the single largest gift to a university ever. In 2007, the couple donated $200 million to Caltech and the University of California, the funds earmarked for the construction of the Thirty Meter telescope to be built in Hawaii.