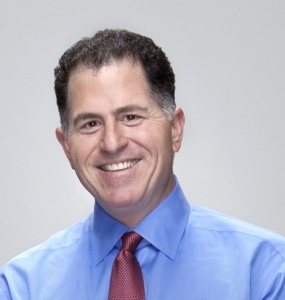 Michael Dell was born in Houston, Texas. His mother was a stockbroker and father an orthodontist. Michael was ever anxious to enter the world of business and he took his GED, or high school equivalency exam at the age of eight. Throughout his teens, Michael worked several part-time jobs, investing his earnings in stocks. He was bitten by the technology bug early and despite his growing interest in business, he was fascinated by computers and how they worked. Dell is the Founder, CEO and Chairman of Dell Technologies.

An Early Start in the Computer Industry

Though Dell’s early start into the world of business netted him a good yearly salary, he started his college career as a pre-med student at the University of Texas. During his years at the university, he started a business, developing and then selling upgrade kits for his fellow student’s personal computers. He applied for a vendor license that allowed him to bid on state contracts for computer upgrades which was incredibly successful. Convinced that being able to sell computers directly to the public would be far more effective that the current reseller and indirect sales model, Dell started his first company in 1984: PC’s Limited. Focusing on computer upgrade kits, Dell incorporated the company in May 1984 as the Dell Computer Corporation 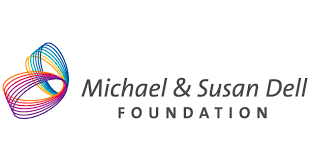 By 1992, at the age of 27, Dell was the youngest CEO of a Fortune 500 company, and by 1996 the company started selling computers on the World Wide Web. The company had reported sales of $1 million per day and by 2001, had a reported global market share of 13% and the title of the World’s Largest PC Maker. In 1998 Dell founded MSD Capital L.P. which was a company that controlled the family investments and which currently employs over 80 people in the US and the UK. In 2004, Michael Dell stepped down as CEO but remained Chairman of the Board of Dell Inc. In 2016, Dell announced the acquisition of EMC Corporation for a record $67 billion, making it the largest tech-acquisition in history.

The Michael and Susan Dell Foundation

The Michael and Susan Dell Foundation (MSDF) was formed in 1999 with a focus on providing grants for urban education, family economic stability, and childhood health programs. In 2006, the foundation gave over $50 million to the Michael & Susan Dell Center for Advancement of Healthy Living, The Dell Children’s Medical Center, and the Dell Pediatric Research Institute, all based at the University of Texas. In 2013, a further $50 million was donated by the foundation to establish a medical school at the university. The Michael and Susan Dell Foundation is active in the United States, South Africa, and India. Since its inception, the foundation has donated over $1.23 billion to causes and programs. In 2014, Dell donated $1.8 million to the Friends of the Israel Defense Forces.
The Dell Scholar Program is a significant part of the foundation and is aimed at providing financial assistance to underprivileged youth to enable them to attend college. The foundation recently launched a subsidiary company called the Ed-Fi Alliance, which provides data on students to educators to help them provide a more rounded education to students.