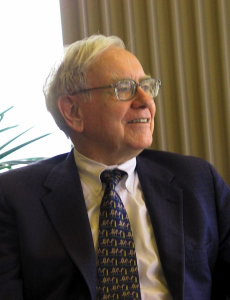 Warren Buffett displayed strong business acumen from a very early age. In a 1944 income tax return he famously deducted $35 for use of his bicycle and watch on his paper route. During his early high school years Buffett and a friend invested $25 to buy a pinball machine which they rented to a local barber. The business model was successful so they purchased three more before later selling the business for $1200. Buffett completed his undergraduate degree at the age of 20, by which time he had saved almost $10,000 from his childhood businesses. In 1951 he graduated from Columbia Business School with a Masters of Science in Economics.

In his first professional jobs Buffett initially worked as an investment salesman and security analyst, before moving into stock broking in Omaha. With his already strong understanding of investment principles, Buffet began to teach investment to a night class at the University of Nebraska in Omaha.
It was in 1956 that he formed the Buffett Partnership Ltd in Omaha. Using techniques he had honed throughout his career he was able to successfully identify companies trading undervalue and he soon became a millionaire. A company that he showed particular interest in during the 1960’s was a textile firm called Berkshire Hathaway. By 1965 he had assumed control of the company and named a new President to run it.

In the late 1960’s he moved Berkshire Hathaway out of textiles and began investing in a diverse range of companies including Exxon, The Washington Post and in later years Coca-Cola. In 1979 Berkshire Hathaway was trading at $1,300 per share and his personal net worth was $620 million. Warren Buffett was President of Berkshire Hathaway between 1989 until 2006 while also holding director positions at Citigroup and Gillette.

In 2008 Buffett was listed as the world’s richest man, and in 2015 his net worth was estimated at $64 billion. In spite of this he has lived a famously modest life, he still lives in the same house he purchased in the 1950’s for $31,500 and he pays himself a $100,000 annual salary. In 2006 he pledged to give away 99% of his fortune to charity. The stunning act of generosity was largely focused towards the Bill and Melinda Gates Foundation, where he has committed 85% of the funds. In 2006 he pledged 10 million Berkshire Hathaway shares to the Foundation with a value of valued $30.7 billion. This was recognized as the single largest act of giving in US history. Every year the foundation receives 5% of the total.

In 2002 Buffest pledged $50 million to the Nuclear Threat Initiative. One of his greatest gifts is his effort to recruit others to follow in his footsteps. In 2010 Mark Zuckerberg joined the ‘Gates-Buffett Giving Pledge’ to donate at least half of their wealth to charity.